Sleeping naked isn’t as popular as you may expect with just under a third of the UK population sleeping nude each night.

However, there is mounting research and evidence that suggests that there are many benefits to sleeping naked.

Sleeping naked can aid your sperm quality because wearing underwear to bed increases the amount of sweating that happens within the area especially if your bedroom is warm.

A study of 500 men was carried out to examine the relationship between sperm quality and wearing underwear to sleep, which revealed that men who don’t wear boxers at night could see an improvement in their sperm quality.

The study of 500 men revealed that those who wore boxers throughout the day but not to sleep at night had a 25% reduced risk of DNA fragmentation in their sperm compared to those who wore tight pants night and day. 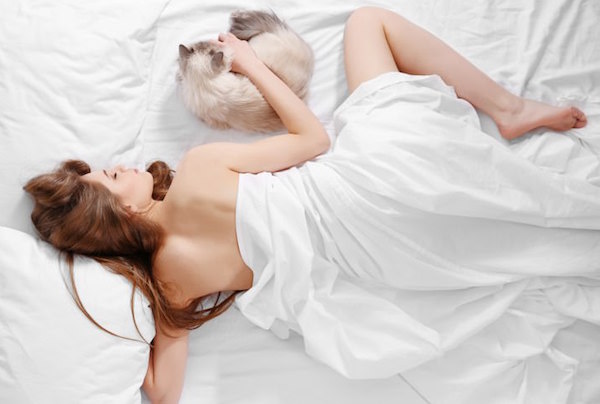 By sleeping naked, women can avoid the development of conditions such as Vulvitis which is the inflammation of the outer layer of the genitals.

The symptoms of this are very visually obvious and will usually cause the skin folds to turn swollen and red.

This infection, as well as other Yeast infections, thrive in sweaty environments such as when you wear underwear or pyjamas to bed and then sweat throughout the night.

An additional benefit of the increased sleep quality you experience from sleeping naked is that it helps to regulate your weight and lose weight in some cases.

Cortisol is released in higher amounts if you keep being disturbed through the night and this hormone gives you the feeling of being hungry which then leads you to overeat.

It is why people who lack sleep find that their appetite spikes and they end up being drawn to unhealthy convenience foods.

When you hit the deep sleep cycles, this triggers the release of the hormone Leptin which is responsible for regulating your appetite. This is why the quality of your sleep is so important.

Sleeping with clothes on can impede the release of the sleep hormone Melatonin. This hormone surprisingly has more benefits than triggering you to feel tired.

By sleeping naked, the release of this hormone is more effective, and this is echoed by Prof. Reiter from the University of Texas Health Science Center, who has revealed that Melatonin contains highly effective anti-oxidative properties.

These properties can fight age-related muscular degeneration or in other words, reduce the signs of ageing.

​If you need to relieve stress then sleeping naked may be the solution for you, and it’s all because of Oxytocin.

Oxytocin is a feel-good hormone that has numerous benefits including lowering stress, depression and high blood pressure.

Higher levels of Oxytocin are released if you sleep naked with your partner as the skin to skin contact triggers a reaction within the brains' hypothalamus which then releases the hormone into your bloodstream.

Oxytocin decreases stress by lowering blood pressure and slowing down the production of the hormone Cortisol which is known for its role for generating stress.

During the summer months, you’ll often find that you have to leave your room fan or air conditioning on all night to keep you cool while you sleep.

Sleeping naked can save you money on your electricity bills because you’ll be cooler so there will be less need for fans and A/C, and if you do need them you can afford to have them on a lower speed setting.

In addition to saving money on electricity, you will also save money where you previously kept having to buy new pyjamas.

Wearing clothes to bed can interfere with your body’s ability to regulate temperature which essentially means the way that your body maintains a natural temperature internally and responds to changes in the external environment.

For example, if the temperature of your room becomes very hot, your bodies response will be to work to cool itself down.

Thermoregulation also helps you to sleep due to being linked to your sleep cycle. As you progress through the evening towards your bedtime, your body triggers its temperature to fall which then causes Melatonin to be released which gives you the feeling of being tired.

As your body prepares to wake in the morning, your body then triggers the production of Cortisol which then increases your body temperature to ready you for the day.

Wearing pyjamas or other layers of clothes can interrupt your bodies thermoregulation ability.

Due to improved thermoregulation, sleeping naked improves sleep quality because the body naturally lowers its temperature to make you feel sleepy.

Clothes can get in the way of this temperature change which can prolong the time it takes to drop in temperature.

Sleeping naked speeds up this process which means that you will fall asleep quicker and experience higher quality sleep cycles.