Unibond has created a lower cost dehumidifier which is referred to as a Unibond moisture absorber which is a great substitute for an electric humidifier. This makes it ideal when you have lower humidifying demands that don’t require large amounts of moisture to be removed from the air.

It’s fair to say that they aren’t as powerful or effective than an electric version. Still, due to their cost, it makes it a useful choice, especially if you’re on a budget and depending on the area you’re trying to treat, you’ll see noticeable results.

When you buy a Unibond moisture absorber, you need to have realistic expectations, and you shouldn’t view them as a cheaper alternative to an electric dehumidifier because it’s different. Moisture absorbers don’t have a fan, so it means they’re limited to only removing air that naturally flows through its mechanism.

Unibond dehumidifiers have refill tablets, and once they have absorbed a certain amount of moisture, they then need to be replaced. Usually, these tablets can absorb a maximum of 500ml of moisture which usually requires a few months on average. Whereas if you compare this to a motor-powered dehumidifier that can remove 15+ litres of moisture from the air per day.

This doesn’t mean moisture absorbers aren’t useful because they have their role in the home. For example, many homes suffer from condensation on windows, and if left untreated, this can develop into mould or damp.

This also makes them great for small spaces such as cupboards or wardrobes; or in boat or caravans where you may not have a power supply that you want to dedicate to removing moisture. It’s also ideal if you don’t want to commit to a larger budget and a moisture absorber will save you a considerable amount of money.

We’ve reviewed the best Unibond dehumidifiers on the market so you can make a better decision about which one is the most suitable for your needs. 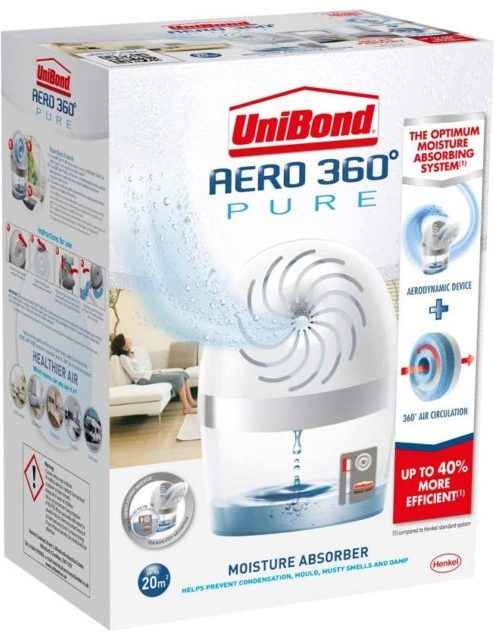 This is the flagship model in the Unibond moisture absorber range and has a natural mechanism to absorb and remove excess humidity from the air. It has a 360-degree air circulation which makes it up to 40% more efficient in comparison to competitors.

The absorber has moisture and odour control which allows it to absorb excess moisture but also neutralise unwanted odours in your home, creating a better living environment. The unit is suitable for rooms up to 20 square metres due to its aerodynamic design which generates 360-degree air circulation, which makes it more effective and treating the surrounding air.

It uses small tabs which are made up of active moisture absorbing crystals and include patented anti-odour agents. The absorber is simple to use:

It has a safe and silent operation and requires no electricity which gives you added safety. It also has a spill prevention damage to stop accidents with each refill lasting for up to 3 months, but this will depend on the amount of moisture in your living environment.

When refilling the absorber, you’ll see how easy it is due to its one-touch loading. The used tab then collects into a spout which makes it simple to empty. There’s also a level indicator which shows you when the refill tab is finished, and it needs emptying.

It has very low maintenance once you’ve bought and only requires you to buy refills with each refill usually lasting around three months. 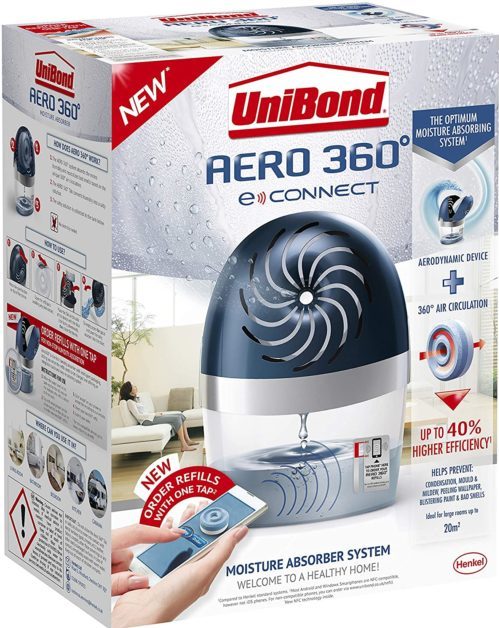 The AERO 360° E-Connect Moisture Absorber is similar to the standard Aero 360 as it works to effectively remove excess moisture from the air to improve your living environment. It uses the same ultra-absorbent crystals which come in a tab form, with these crystals having patented anti-odour technology, converts humidity into a salty solution which collects in the tank of the device and can be disposed of.

The unit gets to work within the first 12 hours and is effective for rooms up to 20m2, and each tab usually lasts for up to 3 months before needing to be replaced which will be dependant on the moisture level and room temperature.

What separates this from the standard Aero 360 is the fact that it has an indicator on the side of the unit which shows you when it’s close to running out our has run out.

It also allows you to connect to your smartphone. This integration means that when it detects that it’s running out of absorber, then it connects to Amazon and orders more, which stops you from running out without realising. Or you can re-order with just the tap of a button.

This is especially useful if you have a busy household where it’s easy to forget to pick up a refill. At the moment, the e-connect system is only compatible with Android and Windows phones.

For the best results, it’s recommended that you place the absorber a minimum of 10cm away from your wall; this means that there will be adequate air circulation around the device to promote humidifying. In term so safety, it’s perfectly fine to use around children or animals, but it’s recommended to keep it out of reach.

You’re not just limited to buying one, and you can use several in the same room if you find that one isn’t doing the job. 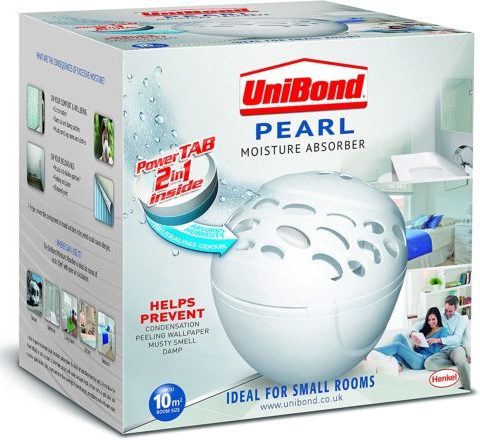 The Unibond Humidity Absorber has a slightly different shape and design to the original 360-degree absorber. You may be surprised that up to 12 litres of moisture can form in the air of your home each day caused by activities such as cooking or showering.

This moisture then condenses and can cause issues such as mould or condensation if your living area has poor air circulation. The Unibond’s humidity absorber can effectively reduce the effects of unwanted moisture.

Similar to the 360-degree absorber it has power tab refills use enhanced 2-in-1 technology which absorbs not only unwanted moisture but also neutralise bad odours, so you have a more pleasant living space.

The unit gets to work quickly and will absorb its first drops of moisture within the first 24 hours with each tab lasting up to 8 weeks. Once the tab has been fully used, you simply open up the device and pour the solution into the toilet and use a new refill tab to restart the process.

This is suitable for rooms that 10 m2 so it’s not quite as powerful as the Unibond AERO, but this area size can still include bedrooms, living rooms or kitchens. It also has an anti-spill system to reduce the threat of leaks or spills while also having a security clip which ensures that any humidity collected remains in the device until you’re ready to pour it away.