Caffeine is one of the worlds most consumed substances that's freely available to buy and use. In the UK alone we consume 95 million cups per day. Despite its availability, it has powerful effects on the human body due to its stimulant benefits so that it can have a significant impact on sleep.

It’s common that people drink caffeine every single day and it forms a part of peoples daily morning lives. Because it’s a stimulant, its consumption needs to be managed. This guide has been created to give you the full rundown on how it can affect your sleep and what you can do to minimise the adverse effects.

How does Caffeine affect the body?

When you ingest caffeine, it stimulates the nervous system which also affects parts of the body. It has a significant impact on your alertness and concentration which is why many people have it in the morning to kick start their day. It also affects the body in the following ways:

Adenosine is a neurochemical produced in the brain, and the concentration of it naturally increases as you progress through the day and it's responsible for giving you the feeling of feeling tired.

Caffeine mimics the presence of Adenosine, and the brain cells can’t distinguish the difference between the two. This is one of the reasons why caffeine gives you an alert feeling and also makes it more difficult to fall asleep.

Melatonin is a hormone within the body that is released to give you a tired feeling which helps you to fall asleep at the end of the day.

Caffeine can cause the suppression of Melatonin production which can cause considerable disruption to your natural sleep cycle, making it harder to fall asleep.

The problem also is that caffeine maintains its concentration in your body for a sustained period and can take 6-8 hours just to half in concentration.

The more often that you consume caffeine, the less noticeable its effects will be, and you won’t feel as alert. This means that you need to drink more substantial amounts of caffeine to feel the same results which makes you more prone to the adverse effects such as jitters and insomnia.

If you’re already someone who goes through several cups of coffee a day, then change some of those cups for an alternative such as decaf, which will limit the level of tolerance and also give your adrenal glands a rest. 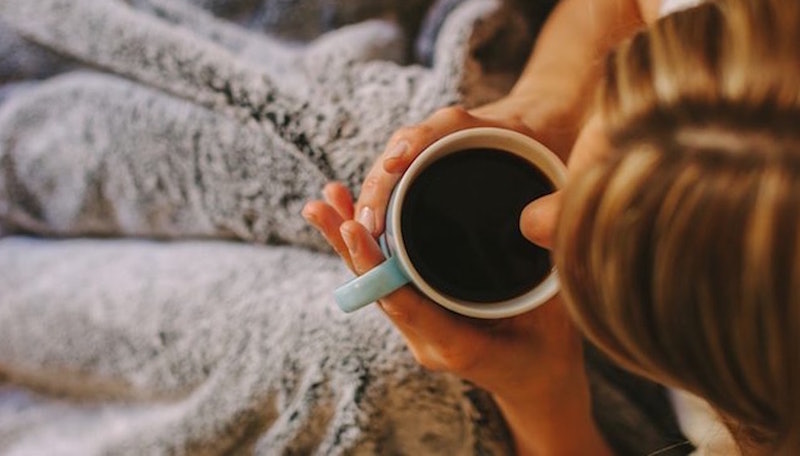 Ingesting caffeine increases dopamine production which is a neurochemical that activates the feeling of pleasure within the brain. This increases alertness and wakefulness and is also the reason why it’s easy to form a habit of drinking coffee every day.

Caffeine boosts Serotonin levels within the body which is often referred to as a happiness chemical.

Serotonin can help to reduce depression, and it’s important to understand that many anti-depressants contain Serotonin reuptake inhibitor that makes this chemical more available for the brain.

This is the reason why after having a cup of coffee you can feel revitalised and energetic.

How to limit the effect of Caffeine on sleep?

Now we’re not saying that you need to cut out caffeine consumption completely, but there are several steps you can take to lower the effects that it has on your sleep:

To stop your sleep disruption, you should limit your caffeine consumption to the morning only. Ideally, you should stick to a daily cut off time of the early afternoon. Morning is when most people need caffeine the most, so this rule will suit most people.

2. Taper Caffeine Throughout the Day

It's normal that most coffee drinkers need the kick start at the beginning of the day. We recommend that you can still have this, but then taper it down as you move through the day and switch to alternatives such as herbal tea or decaffeinated coffee which will ensure that you don’t have issues falling asleep at night.

Nowadays every drink has the option of going large, and this is the same with drinks that contain caffeine.

Large sized caffeine drinks can end up being highly addictive and contain enough caffeine to keep you awake for most of the night which will have you feeling groggy and tired in the morning.

You also need to take into account that caffeine is also in a range of different foods and drinks that you may not even realise such as snacks, chocolates and other energy drinks. So, your daily consumption may be much higher than you think.

These pills speed up the digestion, breaking down the caffeine in your body which means that it will be out of your body by the time you're ready to sleep. This is good for people who consume high levels of caffeine each day and can’t just suddenly stop, and this will help you to taper down slowly.

So if you currently consume large amounts of caffeine, you’ll need to create an action plan, so you don’t suffer from withdrawal. Going completely cold turkey can cause some unwanted side effects such as:

You should follow these steps if you want to decrease your daily caffeine consumption effectively:

Make a log of how much caffeine you consume each day making sure that you include all caffeine sources because it’s present in a range of different snacks and foods.

We’d recommend that you work backwards, so remove caffeine that you consume later in the day and replace it with a non-caffeinated drink. Your higher caffeine concentrated drinks should be had earlier in the day.

If you stick to this, then you will eventually reach your new goal after just a couple of weeks.