Many of us found it difficult to wake up for school in the morning, and this felt like it stayed with us right through our school life and seemed to be a widespread issue.

However, there has been research to explore the relationship between sleep and grades study this further.

Researchers from the University of Washington and the Salk Institute revealed that students within two public high schools achieved higher grades, were more punctual and had better focus when the start of school was delayed by 55 minutes each day.

Why is this necessary?

Adolescents are recommended to sleep for 8 – 10 hours per night; however, it’s been revealed that 62% of US high school students are getting an insufficient level of sleep every night.

The circadian rhythm is essentially a natural body clock which works to ensure we wake up in the morning and feel tired at night. In adolescents, this can be altered which makes them desire to stay up later at night and sleep later in the morning.

Adolescents also have considerably more distractions compared to generations before with the rise in electronic devices which often keep teenagers awake well into the night.

The majority of schools require students to be present between 8:30 and 9:00 am, however, it’s long been argued that the school day start time should be delayed because a large proportion of adolescents are sleep deprived. 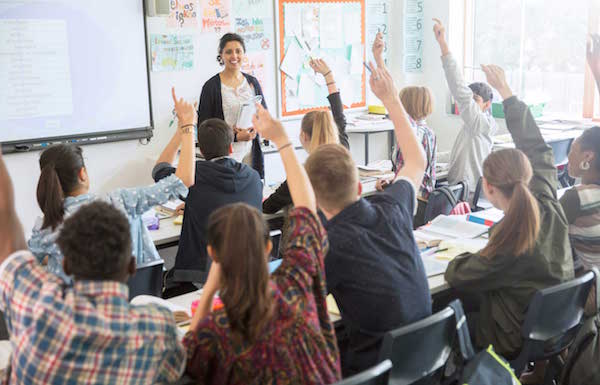 So How Was The Study Conducted?

The study was led by Horacio O. de la Iglesia, PhD, of the University of Washington in Seattle, and with the assistance of a research team worked with the target schools teachers.

To measure the results of the study, the subjects were instructed to wear a wristwatch for two weeks which monitored a range of activity including light exposure and sleep habits.

Findings from the survey showed that students were less sleepy in school because they were experiencing 34 extra minutes of sleep per day. Additionally, grades increased by 4.5% while absenteeism from the first period of the day fell from 15.5 to 13.6 per student year.

This study is backed by other similar research studies that have been conducted. A 2014 study published by the University of Minnesota tracked the sleep habits of 9000 students across eight different public schools in three different states and the results yielded showed that when students got more sleep, they achieved better grades, fewer experiences of depression and lower absences.

So will this be a permanent solution?

Although the research within this topic is growing fast, there are still only a small number of schools that have committed to switching to a later start time.

This is mainly because of the disadvantages of implementing this which include logistical roadblocks, parental schedules and extracurricular school activities.

"It is certainly not an easy thing to do, but it could have huge benefits," de la Iglesia said. "It is pretty clear that high school students will get more sleep if school start times are later."

Digging deeper into the results, a later start time also shows evidence that it can help to close the gap between high and low socioeconomic groups. The high school in a more deprived area with delayed start times has lower absences and lateness compared to a high school with normal start times in a more affluent area.

De la Iglesia stated: "This suggests -- although we can't prove it yet -- that delayed school start times could benefit lower-income students more and contribute to reducing the achievement gap. That is very exciting."

So from the range of studies that have taken place around this theory, it has shown positive results around the relationship between sleep and the grades achieved by studies.

However for this to be rolled out nationwide this will require a collective effort from parents, pupils, teachers and the school board to ensure that there is a smooth transition.

Because of the logistical complications, it will mean that this can’t be done effectively by schools in isolation but needs to be a collective effort by all the schools within a particular district or area for this to work.